Question:  Another ship was supposed to sail with the Mayflower but had to turn back. What was the name of the other ship?

The answer is: The Speedwell.

Read More About The Speedwell Here.

The Leiden Separatists bought a small ship, the Speedwell, in Holland. They embarked from Delftshaven on July 22, 1620.
They sailed to Southampton, England to meet the Mayflower, which had been chartered by their English investors. There, other Separatists and additional colonists joined them. 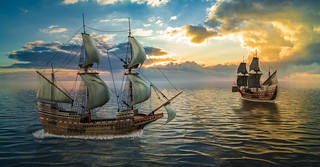